iPhone 13 mini vs Xiaomi 12 Pro: After using for a month, THIS is the better one

iPhone 14 launch coming! Everything that you need to know | Watch

Your Windows 11 is set to change; Know how

The Motorola Edge 20 Pro has got all the flagship features, all of them coming together to offer a sublime user experience, it is a superb smartphone to consider under ₹40,000.
By AMRITANSHU MUKHERJEE
| Updated on Nov 20 2021, 01:57 PM IST

From the budget Moto E series phones to the Moto Razr, Motorola under Lenovo has seen SOME journey. And with the Edge 20 Pro, it embarks on a different chapter of taking on the premium smartphone space, where it succeeds in the first attempt! The Motorola Edge 20 Pro is easily the best Android smartphone under ₹40,000 I have reviewed this year. It gives Samsung, Xiaomi, Oppo, and Realme a reason to go back to the drawing board.

The Edge 20 Pro starts at ₹36,999 and for that money, you are getting the beefy performance of the Snapdragon 870 chip and some eyebrow-raising features to accompany. And after living with it for a while, it seems that Motorola has let its designers and engineers go wild on this one, especially after the endless rain of conservative Moto G models.

The regular candy bar design does not have much to offer in terms of freshness but Motorola has come up with a tasteful paint job and elegant details to spice it up. The Edge 20 Pro in the Midnight Sky (blue) colour is one of the most beautiful smartphones you can buy today at this price.

A matte glass rear amps up the luxurious feel while the metal frame imparts a sturdy build quality; quite a pleasant change from the plastic-glass combo others offer at this price. The detailing around the cameras only adds to the appeal.

Unlike the Edge Plus from last year, the front sheds those curved edges and instead goes for a flat display. Looks handsome, but the 19.5:9 aspect ratio makes Motorola push the volume and power keys higher, which makes people with short hands struggle to lock the phone or change the volume.

This is noticeable as the power key holds the fingerprint sensor too, which itself is fast to react. The buttons themselves lack reassuring feedback and I wonder about their durability in the long term.

Also, no headphone jack, and only a single loudspeaker here. There’s no screen protector pre-installed but you get a plastic case and a charger set in the box.

Motorola has aced smartphone displays in 2021 across all price segments and the Edge 20 Pro is the pinnacle of what it can do in high-end phones this year. Yes, it is an OLED display measuring 6.7-inches with FHD+ resolution, but it is a 10-bit OLED panel. Along with Motorola’s saturated colour tones out of the box, the Edge 20 Pro’s display looks fantastic.

From the standard Android interface to games, social media and what now, this display makes everything look lively. You can tone it down to more natural tones if vibrant displays aren’t your thing.

Brightness levels under the daylight are adequate and the presence of a 144Hz refresh rate makes for a very smooth scrolling experience. No other smartphone in this price range can satisfy the eyes as much as the Edge 20 Pro. Motorola, I am impressed.

The Snapdragon 870 is Motorola’s chipset choice for its flagship and the reason behind that is to get a balance between thermals and efficiency, says Motorola. It also helps the company keep the costs under control, and judging by the numerous SD 870 phones I have tested this year, this chip is more than adequate for most flagship duties.

Coupled to Motorola’s MyUX interface, which is essentially a spruced-up version of stock Android 11 with custom Motorola bits, the Edge 20 Pro feels effortlessly fluid on a daily basis. I was able to run most of the popular Android apps without any stutters or lags throughout my usage. The clean interface with no preloaded third-party apps, except for Facebook and Google apps, imparts a pleasant experience.

There are tasteful customisation options baked in and some of the Moto exclusive features are highly convenient. The Peek Display and Moto Gestures remain my favourites. However, it is the “Ready For” feature that caught my fancy, which allowed me to easily mirror my phone on my PC, and bring out a desktop version of Android on a smart TV. The ability to run your OTT apps in the large screen format is a big bonus too, especially with Prime Video and Netflix. However, do note that your TV or monitor needs Miracast to bring out the “Ready For” interface.

Those who game a lot will be happy with the performance on offer here. I was able to play Call of Duty: Mobile at the highest settings effortlessly; the same was the case for F1 Mobile Racing. The 576Hz touch sampling rate helps to a larger extent and the Snapdragon 870 does not bake the hands. Battery consumption is also well optimised, with an average of 3-4 percent in short 15-20 minute sessions of the COD.

The audio experience from the single loudspeaker isn’t adequate for viewing content but the in-built audio tuning system for wireless earbuds is handy for those who seek a custom sound experience. Call audio quality has been very good and with the “CrystalTalkAI” enabled, having longer conversations was comfy.

Network connectivity has been strong so far, with the phone easily able to host a call in my basement parking. There’s support for 5G too with multiple bands, which could be helpful for long-termers in the coming years.

The Edge 20 Pro goes ambitious here with a camera setup inspired by the high-end Samsung S21 Ultra. It carries the same 108MP main camera and the 16MP ultra-wide camera from the regular Edge 20 but gains an 8MP telephoto camera with 5X optical zoom; the latter being a rarity in this “flagship-killer” space.

Photos from the main camera look pleasant in daylight, with Motorola’s nicely tuned HDR mode highlighting the shadows and suppressing grains nicely. The colours are saturated more than usual and so is the contrast at times, with a slightly warm tone. Most users will like this colour treatment. The 108MP sensor gets a lot of details, especially in low light and dark situations; although I had to use the Night Vision mode to get the most out of it.

The ultrawide camera has a different colour science that looks slightly muted and with light levels falling, it struggles to keep the sharpness. However, it doubles up as a high-quality macro camera and as long as you have ample lighting, you can get some nice photos. The telephoto camera, however, impressed me more with its zoom performance, even if got warmer colours. Until 5X magnification, there’s no noticeable loss in sharpness and the presence of OIS helps to a larger extent. Satisfactory photos are possible up to 10X magnification. Under low lighting, the zoomed photos appear soft. 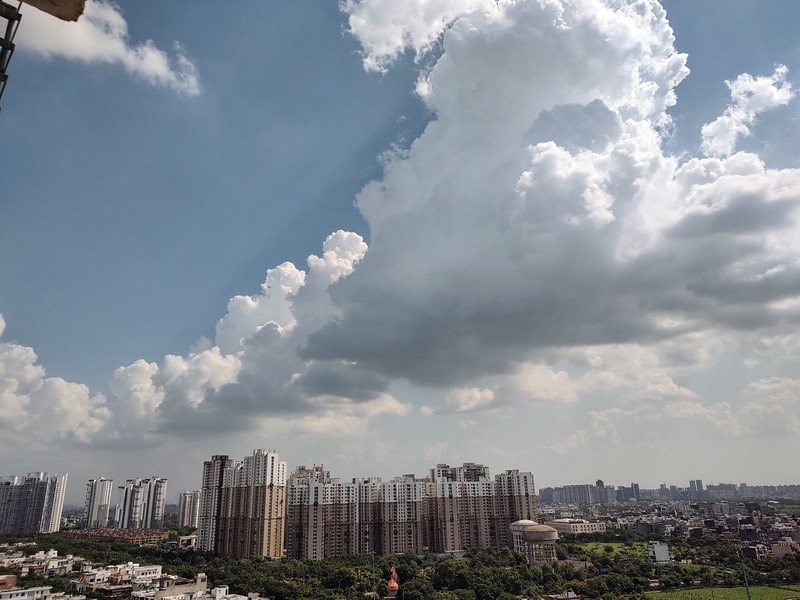 Video performance is good for a phone of its class. The main camera returns the best quality at up to 4K at 60 fps with closer to natural colour tones and decent stability. The telephoto camera can record video too as long as there’s good light, and you can use the audio zoom to feature amplify the sound from the subject.

Lastly, the selfie camera did well under most lighting situations, taking sharper facial features in warmer colour tones. The portrait mode does a very good job at subject separation and tasteful background blurring.

All in all, the Edge 20 Pro has got nice cameras for a phone of its class.

Having a 144Hz display paired to a Snapdragon 870 chip raised questions about the battery life, especially considering the 4500mAh capacity battery. However, I am happy to report that the Motorola Edge 20 Pro has easily lasted me an entire day with 25-30 percent juice to spare on the busiest of days.

With a leisurely use case of just making calls, browsing social media for 2 hours on average, doing light photography, and streaming music, I had to plug the charger after a day and a half.

I am also glad to see Motorola moving to a 30W PD charger that takes just about an hour for a full charge from dead. The charger itself is able to charge laptops, which is a bonus in the current WFH situation.

I won’t beat around the bush -- the Motorola Edge 20 Pro has got me impressed. It is fast, has some very nice cameras to play with, a sorted Android experience, and an amazing display -- all of that put together in a beautiful body. There are a few niggles (like the awkward button placements) but the rest of the phone is good enough to make them disappear.

Most importantly, it tags along a reasonable price of ₹36,999. Compared to other Snapdragon 870 and Dimensity 1200 equipped phones such as the Xiaomi Mi 11X, iQOO 7, Oppo Reno 6 Pro, and Vivo X60, this is the most polished smartphone we have seen this year in this segment.

Interested buyers may face a dilemma of choosing between iQOO 7 Legend for its Snapdragon 888 chip, and this Motorola. While the iQOO 7 Legend has a massive advantage with raw power, it is the Motorola Edge 20 Pro that comes out as the more balanced option; the latter’s overall user experience makes it our favourite.

To sum it up: The Motorola Edge 20 Pro is our top recommendation if you seek the most polished flagship experience for under ₹40,000.

Not happy with your iPhone speakers sound? Fix it this way, but proceed with caution

Too many Windows 11 notifications? Mute them ALL, Use Focus Mode now!

Lost your iPhone password? Unlock it using THESE 5 steps

iPhone alarm of your sibling IRRITATING? Silence it using Siri but MIND this step

iPhone 14 Max rivals will give it a very TOUGH time and that is FINE for you!

Motorola Edge 30 Review: Lacks the EDGE over its rivals

iPhone 13 mini vs Xiaomi 12 Pro: After using for a month, THIS is the better one

iPhone 14 launch coming! Everything that you need to know | Watch

Pokemon Go Community Day to be held on May 21; Know everything about this offline event

Apex Legends Mobile has TOP 5 Weapons you must try! Check out this AWESOME guide

New State Mobile gets another BIG update: In May, play with new modes, weapons, maps