With Moto G51, Motorola is offering a brand new Snapdragon 480+chipset that brings along 12 global sub6 5G bands, along with dual SIM 5G. This is unheard of in India, as Motorola is the first one to bring the Snapdragon 480 to our shores; that too in a phone that costs ₹15,000 (Nokia charges a hefty premium for this). This means that the Moto G51 5G is going up against the Redmi Note 11T 5G, Realme 8 5G, and Poco M3 Pro 5G, all of which have their own pros and cons.

So, has Motorola got the recipe right? On paper, it certainly seems so. In the real world, it isn't different from my expectations. After using it for two weeks, I have a lot to share.

At first glance, it could be difficult for you to differentiate the Moto G51 with the recently launched Moto G31. Both the phones have similar form factor, with identical looks. Despite its plastic unibody design having a slight gradient finish, this is a very simple phone that may not grab hold of your attention. With the Google Assistant button, sound button and power button (also hosts a fingerprint scanner), all placed at the right hand side edge and the logo at the rear, the company has played it safe, making it look similar to existing Motorola phones.

Looks are subjective but it is safe to say that Moto G51 won't catch your eyeballs when it is surrounded by the competition from Redmi and Realme. The phone is slim but not as light as Moto G31; it tips the scales at 208 grams. It has also got an IP52 rating for water protection. The fit and finish of the phone is elegant and Motorola has also tried to make it look nice by giving it a gradient paintjob with IndiGo Blue and Silver colour options. It's not bad but Motorola could have surely livened up the design of this rather boring Moto G51.

The Moto G51 comes with an LCD display unlike the Moto G31, which offered an AMOLED screen. However, the 6.8-inch screen size of the Moto G51 is bigger compared to Moto G31 (6.4-inches), and slightly bigger than the competition. With a large display size, 120Hz refresh rate and FHD+ display resolution, I had an enjoyable viewing experience , especially with my weekend movie sessions, or shows on Netflix.

While playing games or scrolling through social media, the 120Hz refresh rate helps in smoothening up the animations. The touch response of the phone has also been nice and quick.

The Moto G51 5G is the only smartphone in India offering the Snapdragon 480+ chipset (at the moment), paired with 4GB LPDDR4x RAM and 64GB [uMCP (eUFS)] of storage. This is the only variant of the phone available in India as of now. The operating system is a clean version of Android 11 with mild Motorola additions.

On a daily basis, the Moto G51 runs swiftly. Whether I scrolled through Instagram or read through my emails, the G51 kept its cool and responded in the exact fashion I expected it to. Even while gaming, the Moto G51 held on its composure well. Titles such as Candy Crush, Temple Run, and even Call of Duty Mobile did not tax the phone highly. That said, it is not as burdenless as a Snapdragon 732G-equipped Moto G40 Fusion.

I did not notice the phone heating up even after using it for long sessions of watching movies, videos and even gaming. Now coming to the audio quality of the phone, despite it having a single loudspeaker, the audio quality is commendable for a phone of this price; and it is loud. Audio performance out of the headphone jack on regular earphones has been good and turning on the Dolby Atmos audio only enhances the experience.

Call performance has also been good so far. On Jio's 4G network, Internet connectivity was reliable; however, it may depend on the area you reside. Having 12 bands of 5G onboard is a positive assurity that this will hold itself well in the future. However, with no 5G around, this is just a theory I cannot test in India at the moment.

Photos come clear and fine under daylight but it becomes a bit hazy in low light. Night Vision mode helps bring back some details and for a phone of this price, this is acceptable. You will still get usable photos though. The 13MP selfie camera is decent. However I felt that the image went a bit smoother and gave a reddish-orangish effect. 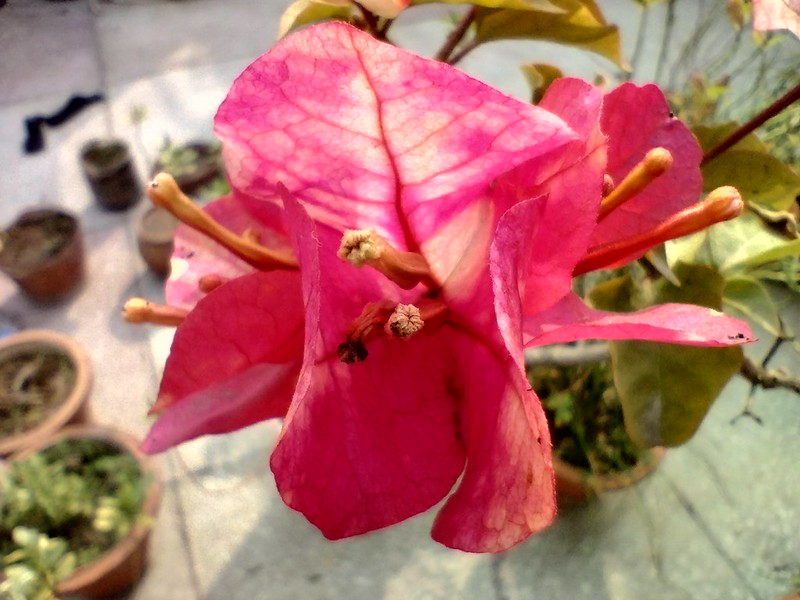 Macro photos did a fair job but I liked using the primary camera as shots came out clearer with better details. And of course, it can be cropped or zoomed, if needed. Coming to the videos, I loved the auto focus ability while shooting videos. The video also appeared stable and had clarity.

The smartphone is equipped with a 5,000mAh battery and a 20W rapid charger. Based on my usage on an average working day, i.e., an hour of social media browsing, some gaming and 3-4 long hours of YouTube sessions, the phone provided me approximately 2 days of battery backup on single charge.

Note that my usage, including the ones on the weekends, involved watching videos, movies and playing games for long hours. And even after continuous use, the phone survives for a day and half.

However, the phone takes a lot of time to charge fully from under 10 percent. It takes almost 2.5 hours for the Moto G51 to charge when it is completely drained out.

The Moto G51 is a considerable option for gamers and binge watchers at the price range it is being offered. However, if you are looking for more storage then you may get a bit disappointed as the phone is available in only one variant in India; 128GB variant should have been offered The display along with Dolby Atmos audio makes for great multimedia experiences, and the long battery life is a boon.

On the whole, I think the Moto G51 is a great option for those who are looking for a big smartphones with a fast 120Hz display, a solid battery life, and decent cameras. In a sea of affordable 5G phones around ₹15,000, this earns a solid recommendation from us.

Want to use WhatsApp account on two phones? Know the SECRET here

Forever 21 Bets You Want to Dress Like Your Roblox Avatar

Spotify, Epic Games get ally in Elon Musk in fight against Apple fees

Need For Speed is coming back! NFS Unbound with new racing style launching on December 2