PUBG Mobile joins the list of China-linked applications banned by the Indian government. Here is what you need to know about the game.
By: KUL BHUSHAN
| Updated on: Aug 20 2022, 22:52 IST

The Indian government on Wednesday banned PUBG Mobile and 117 other China-linked applications. The move comes weeks after the government banned 47 applications which were mostly clones and variants of 59 apps that were banned in June. The first wave of ban saw the removal of popular apps such as TikTok and UC Browser.

Why India banned PUBG Mobile and others?

The Ministry of Electronics and Information Technology (MeitY) said that the apps were prejudicial to the sovereignty, integrity, defence of India and public order.

The ministry further said that it had received several complaints of misuse apps on Android and iOS platforms. These complaints alleged that these apps were stealing and surreptitiously transmitting users' data in an unauthorised manner to servers which possibly had locations outside India.

“The compilation of these data, its mining and profiling by elements hostile to national security and defence of India, which ultimately impinges upon the sovereignty and integrity of India, is a matter of very deep and immediate concern which requires emergency measures,” the ministry said in a statement.

“This move will safeguard the interests of crores of Indian mobile and internet users. This decision is a targeted move to ensure safety, security and sovereignty of Indian cyberspace,” the statement added. 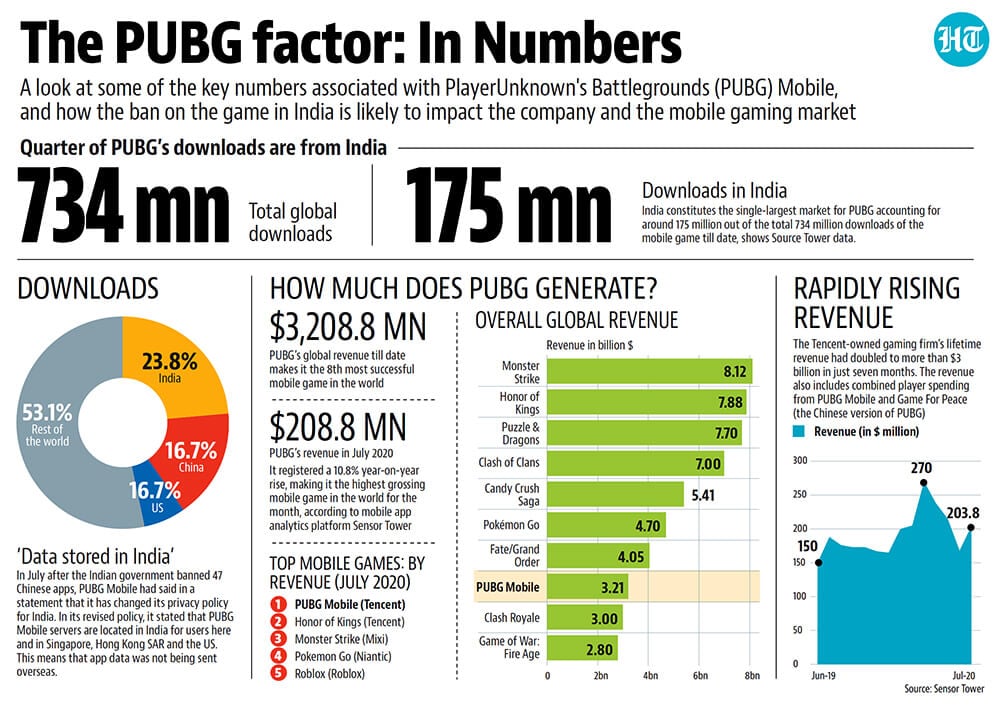 So PUBG Mobile is a Chinese app?

Not completely. PUBG has been developed by PUBG Corporation, which is a subsidiary of Krafton Gaming Union, formerly known as Bluehole. Krafton is a South Korean company. Following the popularity of the desktop version (that can be played on PCs and laptops), PUBG tied up with China's Tencent to develop and distribute the mobile application.

Just like the PC version, PUBG Mobile became instantly popular, especially in India. The game had more than 40 million monthly active users in July in India alone. According to Sensor Tower, India has remained the biggest markets for PUBG Mobile for a while now. In fact, India contributes 24% of the total installs since the launch of the game.

In the last couple of years, PUBG Mobile hosted multiple tournaments with big prize money both in India and globally. The company had created a big ecosystem of a loyal base of streamers and gamers. Mishi Choudhary, a technology lawyer working in the US and India, explained the law under which the government imposed a ban on the applications.

“The section gives the government power to ban any information in the interest of sovereignty and integrity of India, defence of India, security of the state, friendly relation states, foreign states or public order or for preventing incitement to the commission of any cognizable offence,” she told Hindustan Times.

Nikhil Pahwa, the founder of publication Medianama, pointed out that China cannot continue to control its own internet ecosystem and at the same time benefit from the openness of the internet in other countries.

“Given the control that the Chinese government exercises over Chinese companies, I think there is a risk of them being used against Indian citizens, and in the interest of the security of India's internet infrastructure, the government has taken the right action. China should realise that it can't have it both ways: tight control over its own internet ecosystem, while benefiting from the openness of the internet in the democratic world,” he said.

ALSO READ: PUBG Mobile banned: Here are 7 alternative games you can play instead

Faisal Kawoosa, founder and chief analyst at techARC, said that the move will help India convey a strong message to China.

“India being one of the largest digital markets in terms of consumption of digital products and services is significant for any producing market including China. With the ban of PUBG, one of the most popular and successful apps from China, the message is loud and clear that trade can only prosper in tranquillity,” he said.

Get iPhone message alert tone to identify the sender in a jiffy; Here's how

Microsoft Is Ready to Fight For Its $69 Billion Activision Deal

Forever 21 Bets You Want to Dress Like Your Roblox Avatar