With a reliable battery life, the iPhone 13 Mini is as good as a compact phone can be, unless you mind its cramped display.

iPhone 13 Mini review: Would you buy a smaller-than-normal iPhone? I would, as long as the battery gets me through a day and I don’t have to compromise on the basics for the sake of a handy phone. The iPhone 13 Mini satisfies this need of mine and millions of other compact phone fans, and that is all the reason you need to buy the iPhone 13 Mini. Yes, it is that simple.

But then again, you are paying ₹70,000 for it and just being a compact phone with a larger battery won’t cut it for everyone. It has to have the same nice cameras as the bigger iPhone 13, a very fast chip, some snazzy colours, and a pleasant user experience. So, how does Apple’s second attempt at a “Mini” iPhone fare in the real world?

After giving 10 days to the Midnight (very dark blue) iPhone 13 Mini, I am here to deliver the verdict.

The iPhone 13 Mini looks almost identical to the iPhone 12 Mini from last year, except for its camera hump and the display notch. The diagonal lens placement does more visual justice to the compact footprint and the smaller notch liberates more space, thereby making it more akin to a high-end Android phone from 2018. Yes, 2018, as most phones in 2021 do not have display notches.

While I find the still-big notch unacceptable in 2021 when compared to what Samsung and everyone else is doing, I appreciate the bold boxy design with the flat surfaces second year in a row. It looks astonishing and its 141 grams of his/her “Mini-ness” pampers the palms. I still haven’t used a phone lately that is this handy to carry around. And yes, it is still made of metal and glass, not the plastic construction Samsung relies on.

Apple still keeps the glossy surface on the rear and that takes up smudges like a pro; keep a wipe cloth handy to maintain the sheen (or get a lighter colour). But as I exposed it to the rough and dusty outdoors that is Noida, the iPhone 13 Mini took everything I threw at it and came out unscathed – not a single scratch or scuff yet! Mind you, it had to share my pocket space with my scooter keys, coins and a plump wallet.

The downside of a compact phone is usually a tiny display but unlike the vintage sample on the iPhone SE, the iPhone 13 Mini stretches it to the edges with slim bezels to spare. And a large annoying notch that still creeps up into your vision. While it is certainly more usable than an iPhone SE’s display, the 5.4-inches of its boundaries is not big enough (by modern standards) to be enjoyable for YouTube sessions or long social media browsing, unless you force yourself to be content with it.

That said, it is a fine display with vibrant colours and high brightness levels. The saturation is well controlled and under the noon sun, it is easily visible. Sadly, you have 60Hz of refresh rate to play with and next to the 120Hz displays on an equivalent Samsung or Oppo flagship, the scrolling feels lazy. Having the ProMotion display on the regular iPhone 13 models was necessary this year, I feel.

This is an iPhone and performance is what separates it from the rest of its class. The pairing of the A15 Bionic chip and iOS 15 make the iPhone 13 Mini the second most effortless smartphone I have experienced (the first spot goes to the iPhone 13 Pro Max). An iPhone 11 from 2019 can still play the latest games and juggle through all tasks without breaking sweat; the iPhone 13 Mini does it as nicely, only with more performance potential in the reservoir.

On the regular work days, this new iPhone has not yet shown signs of struggle, or given up on a task. For a regular folk, this iPhone 13 Mini has enough performance now and based on the history, I think it will stay the same for the next three years. iOS 15 feels like a natural extension of yourself in the world of software, with gentle animations and thoughtfully designed elements.

It feels restrictive compared to Android but once you get used to it, it feels like a hotel room – everything is neatly arranged, well appointed, and everything works all the time as expected. And, if you have an iPad or a MacBook, it fuses effortlessly with your digital world, with all Apple products acting as extensions of each other.

And secure too! My iPhone 13 Mini frequently kept alerting me about password breaches, and complaining of apps and games that wanted to track me. Considering all the strict privacy baked in, I feel safer with an iPhone always; I cannot say the same for an Android phone.

Enough of iOS romanticising, let’s look at the rest of hardware. The stereo speakers are of good quality with ample audio depth and volume, but it still cannot beat the speakers on the Asus ROG Phone 5. The haptic feedback is second to none; it makes every interaction with the phone feel human.

The iPhone 13 Mini supports next-gen 5G networks but us poor Indians are still stuck with 4G LTE. Nonetheless, network connectivity has been strong on the Jio network and I have not witnessed call drops even in my basement parking. The call quality itself is loud and clear.

I have already covered the iPhone 13 Mini cameras in detail; check it out. For the lazy readers though, here’s the brief. With the larger new camera sensors and an updated ISP chip, the iPhone 13 Mini is more of a reliable camera than before. In daylight, it reproduces photos in the same way you see, i.e., natural white balance and colour tones, adequate sharpness, superb exposure management, impressive noise suppression.

This is where the Photographic Styles feature comes in. I was able to alter the white balance and colour tones to my taste, and even get rid of the yellow cast without changing the skin tones and detail levels. As critics have said, you can get the Google Pixel or Samsung style of colour treatment from this camera system. As an enthusiastic photographer, this feature made it delightful shoot still photos.

The Cinematic video mode is fun to play with but is largely a gimmick. It is highly inconsistent with the advertised auto face detection and the subject separation leaves a lot of room for improvement. 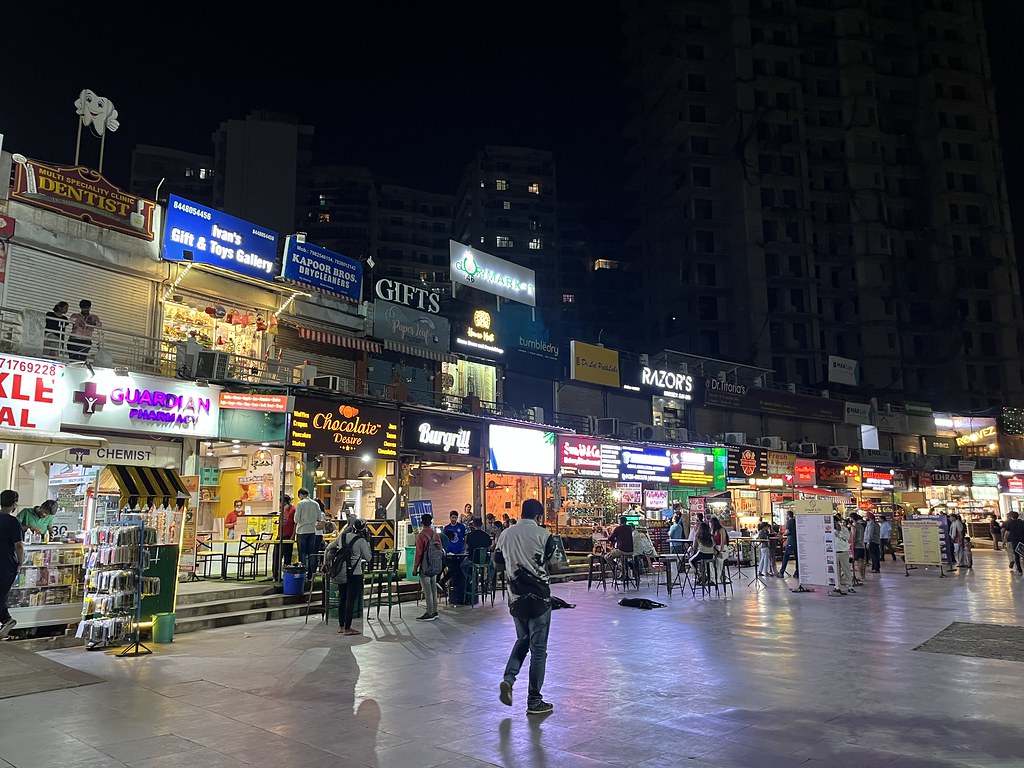 What still remains mighty impressive is the video quality. Whether you shoot in 4K 60 fps or 1080p 30 fps, the video quality is consistent and second to none in its class; I observed a natural white balance, good sharpness levels, and great exposure management. The Dolby Vision footage looks good on a compatible display and even if you turn it off, the results are nothing short of marvellous.

The 12-megapixel front camera still stands up to the higher-res cameras of Android flagships today. You get good looking selfies with lots of details, natural skin colour tone and white balance. Portrait mode selfies do a better subject separation and artificial blurring than what Android phones can achieve. However, if the lighting isn't good, the iPhone 13 Mini's selfies sprinkle grains and wear pale colours.

With a bigger battery and a more efficient chip, the iPhone 13 Mini is now practically an all-day smartphone. On the busiest of days when it had to host hour-long calls, quick gaming sessions, 2-3 hours of social media browsing, and music streaming for most of the day, the iPhone 13 Mini had 30 percent juice to spare by the end. The battery section was consistently showing 6-6.5 hours of screen-on-time. This is as practical as an Android phone with a 4500mAh battery. On the current version of iOS 15 with no patches, there is some considerable idle drain and I hope Apple fixes it soon.

Hence, for the first time in my history, I used a compact iPhone that did not die on me midway through a day. And when it needs a power refill, the 20W Apple Adapter can fill it up in just under 1.5 hours. That is not as fast as the charging system that Oppo, Realme and Xiaomi offer in similarly priced phones. But it works fine as long as your schedule allows you letting go of the phone for a while.

MagSafe charging returns but with no speed boosts. I barely used it, given that it charges slowly at 12W of speeds and heats up the phone.

Sub-par battery life was what kept many from getting the iPhone 12 Mini and now that Apple has fixed it in the iPhone 13 Mini, the “mini iPhone” steps up to into the practical category where the iPhone 12 and iPhone 11 reside. Surely, the regular iPhone 13 with its bigger display (read naturally sized in 2021) and larger battery (read longer) will still be a major draw for many, including myself.

But the iPhone 13 Mini is now a solid smartphone with no concerning compromises; it’s got solid cameras, good battery, and a comfortable form factor. The smaller display might still be not enough for soaking in entertainment but you know what you are getting into with a compact “mini” iPhone. For small phone seekers, the world has just gotten a lot better with the iPhone 13 Mini.

Should you buy it? Absolutely, as the iPhone 13 Mini is as reliable as its bigger siblings. The mini iPhone is finally dependable.