Samsung to bring The Serif TV to India next week

The new Samsung Serif TV range will be available in India next week at a starting price of ₹85,000.

Samsung first introduced The Serif smart TV back in 2016. Then last year at CES 2019, the company introduced a new version of The Serif TV along with The Frame. Now, nearly a year later, the company is all set to bring 2019 Serif TV to India. The Serif TV range will be available in India next week at a starting price of ₹85,000.

To give you a quick brief about The Serif TV, this smart TV series has been designed by the French designer duo brothers Ronan and Erwan Bouroullec and it comes with a 4K QLED display. It has a unique unibody design in the shape of the letter "I".

On the feature front, The Serif TV comes with an Ambient Mode that provides information, such as news headlines and weather updates, to the users. It comes with the ability to display imagery, and blend into any living space when the TV is turned off.

In addition to that, The Serif TV comes with the NFC technology that allows users to seamlessly connect to smartphones to stream music and other content by placing their smartphones on top of the TV. It is worth noting that this is the only TV that comes inbuilt with such technology.

The Serif also features support for AirPlay 2, which enables users to play videos and music, or share photos from their Apple devices to the TV. It will also allow users to take voice control one step further with voice assistants like Alexa and Bixby directly integrated into the TV. 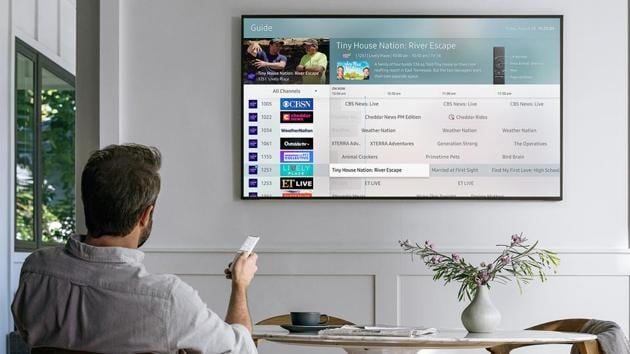 Samsung TV that bends and twists at click of remote