The number of YouTube creators who no longer rely on advertising for the majority of their income is growing fast.

Two days before his first trip abroad since the coronavirus pandemic began, Jerry Dyer went live on YouTube to discuss his itinerary. Dyer is a middle-aged British entrepreneur who makes a living by filming videos of planes taking off and landing. Big Jet TV, his entertainment company catering to hardcore airplane enthusiasts, has attracted more than 85,000 devoted followers on YouTube.

Sporting a Big Jet T-shirt and hat, Dyer told his fans about his upcoming plans for visiting Amsterdam’s Schiphol Airport, the third-busiest transit hub in Europe. He discussed the finer points of its runways and identified the big goal of the adventure: laying eyes on a juicy Emirates 747 freighter. He gestured to a map of the airport. “Just look at that,” he said. “That’s the Dutch — a whole parking lot there specifically for plane spotters.”

As viewers in the chatroom babbled excitedly, Dyer reminded them that videos from the trip would only be available to his “first class” and “super class” members who pay either $4.99 or $19.99 a month for access to special Big Jet programming and other perks. “This is the standard procedure we do when we go overseas,” he said.

Since December, the number of people who pay for Big Jet TV has more than doubled, climbing to 4,000 from about 1,700. Dyer and his business manager, Gilly Prestwood, make close to $20,000 a month from subscriptions, of which they bring home roughly $14,000 after YouTube takes its 30% cut. “We’ve built a great model,” Dyer said.

Not long ago, trying to charge viewers to watch your videos on YouTube would have been something else — a career-ender. The site is the largest advertising-supported video portal on the planet and beloved by its more than 2 billion users, in part, because they can watch a steady stream of music, late-night clips and how-to videos for free. But Dyer is part of a growing breed of YouTube creators who are now making most of their income on the site by charging fans for subscriptions.

While advertising remains the primary driver of revenue for most creators, in April 80,000 channels earned money on YouTube from alternative sources, up 20% from the previous month. Between January and May, the number of contributors like Dyer who no longer rely on advertising for the majority of their earnings grew 40%, according to Neal Mohan, YouTube’s chief product officer. “It’s important for our creators to have a diversified portfolio,” said Mohan in an interview.

The rise of alternative forms of income on YouTube, part of Alphabet Inc.’s Google, is being driven by several factors. In recent years, a series of brand safety scandals have forced YouTube to halt ads on channels affiliated with such things as hate speech and pedophilia. Along the way, YouTube also inadvertently limited ads on thousands of less-offensive videos, depriving creators of their main source of earnings and pressuring them to look elsewhere for sustenance.

Some of the disenchanted video personalities decamped to rival platforms like Twitch, Instagram, Facebook and TikTok. Twitch, in particular, was developing a culture in which fans routinely made significant donations directly to their favorite personalities, with the Amazon.com Inc.-owned streaming service taking a small cut of each gift. The result was a thriving creative community that was much less dependent on ads.

In 2017, facing growing competition for the next generation of online stars, YouTube introduced SuperChat, a feature that lets viewers pay to have their messages stand out in a stream of comments. The company has since rolled out additional ways for contributors to make money on YouTube that don’t rely on advertising, such as tools for selling merchandise, charging for memberships, and encouraging small in-app purchases.

The coronavirus pandemic and the subsequent plunge in ad spending has only increased the pressure on video creators to experiment with new ways of making money. While some YouTubers have launched retail brands or inked development deals with streaming services or TV networks, the vast majority of YouTube creators are are like Dyer — not famous enough to get a Netflix show or start a fashion line. Getting their most passionate fans, perhaps 5% to 10% of their audience, to chip in on a regular basis may be a more realistic plan for economic stability.

Some creators are also hoping to make money from e-commerce. Seth James DeMoor, a professional distance runner and YouTuber, sells about $2,000 a month in branded T-shirts and hoodies on the site. He sees an even bigger opportunity in his video reviews of running shoes. YouTube, he said, could add a virtual shopping cart inside the videos and then split the resulting referral revenue with creators. “I wouldn’t be surprised if we get that down the road,” he said.

Recently, looking to reassure some doubters on Wall Street, Google has started to tout subscriptions and e-commerce as the next phase in YouTube’s growth story. “What’s been nice to see is the role those products have been playing in light of all the uncertainty and challenges creators are facing,” Mohan said.

Like many YouTube personalities, Dyer stumbled into the business by accident. About five years ago, his nephew told him that Bruce Dickinson, a licensed pilot better known as the lead singer of Iron Maiden, was flying into town on his plane, Ed Force One. Dyer raced to the airport and went live on Twitter. To his surprise, a few people watched his play-by-play of the landing and raved about the performance.

Dyer had spent most of his adult life chronicling extreme sports and powerful machinery, running a motocross publication called MX Racer and founding DIRT, a magazine devoted to downhill mountain bikes. He developed a love of planes at an early age, growing up in the shadow of Heathrow, the world’s second-busiest airport. Periodically, his parents took him to air shows where he fixated on big ones like the Vulcan bomber, a centerpiece of the Royal Air Force. “The louder, the better,” Dyer recalled.

Hooked by the positive response to his first landing video, Dyer started posting similar live content on Periscope, the streaming platform owned by Twitter Inc. He later shifted to Facebook, then YouTube, where his audience took off.

Before long, Dyer settled on a winning formula. The first 20 minutes of his videos are free. Beyond that, viewers have to pay. Dyer streams for hours at a time, only stopping when the runways go quiet, the battery on his camera dies or his bladder needs emptying. His longest stream, shot in Toulouse, France, lasted 11 hours. Most paying viewers, he said, watch every minute of every show.

During the early days of the pandemic, with the economy cratering and Dyer stuck at home, Big Jet TV lost 400 subscribers. But as soon as Dyer and Prestwood started going back out into the field to Heathrow and other local airports, they regained all the lost customers and then some, adding about 800 more over a six-week stretch.

“We’re managing to plow through corona based on the model we run,” Dyer said. “If it wasn’t for YouTube, we would have gone bust.” 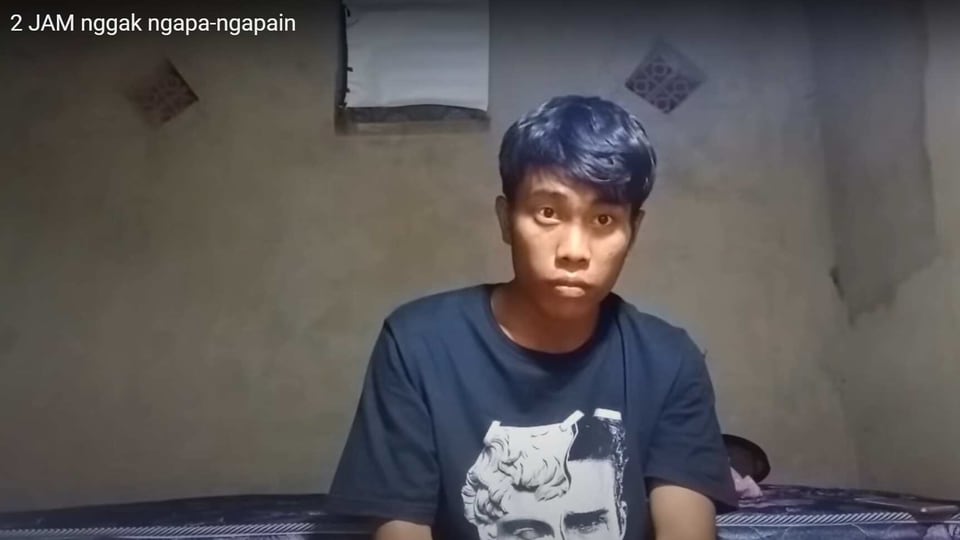 YouTuber posts a video of himself doing nothing for 2 hrs, gets almost 2 mn views