Nothing Phone (1): Here it is in all its “black and white” glory, check out its cool lights!

GTA Online VIP registration on PC, Console and Xbox: Do it THIS way

The Vivo V23 Pro has gone flagship-grade with top-of-the line specs and an even better front camera system. Should you buy it though?
By AMRITANSHU MUKHERJEE
| Updated on Jan 07 2022, 10:12 AM IST
Rating
3.5 out of 5
Price
INR 38,990/-
Product Name
Vivo V23 Pro
Brand Name
Vivo
Pros
Cons
Specifications

Vivo’s V series phones have been all about the selfie camera and over the last few years, we have seen Vivo experimenting in this regard. Pop-up cameras, dual cameras, eye-autofocus, and high-resolution sensors – there’s enough tech sitting in the front camera of a Vivo V series phone to out the iPhone 13 to shame. But in real world, is that enough for a phone costing around ₹30,000?

In the past , the answer has been mostly “nah”. Vivo took this seriously and hence, the V23 Pro ends up being more like a high-end flagship than a strict midrange phone. Fancy curved display? Check. High-end chipset? Check. Highest resolution cameras? It’s here. One useful/useless gimmick? Just turn it around. The Vivo V23 Pro is the most “Pro” the series has ever got and after living with it for the past couple of weeks, I still have mixed feelings about this.

Note that all those high-end bits put a price tag of ₹38,990 for the base 8GB RAM variant, which puts it in the same category as Oppo’s Reno 6 Pro.

The marketing materials for the V23 Pro this time throw the spotlight on its colour changing back. Using a Fluorite material, the V23 Pro’s rear changes its colour from gold to light blue! And all it needs is some sunlight! It’s nothing like anything I have seen on a phone so far and it certainly is a crowd puller. Throw any kind of ultraviolet light and your Sunshine Gold Vivo phone turns blue; kids assume I know magic.

The grandeur doesn’t end there though. The V23 Pro also gets curved edges on its display and a very slim profile. Coupled with a flashy large camera hump boasting of its 108MP camera, the Vivo V23 Pro is a trendsetter for midrange smartphone design. Most importantly, at 171 grams, the V23 Pro is dearer to the hands. No IP rating for water and dust protection though.

At 6.5-inches, the V23 Pro’s display has enough canvas space to satisfy most entertainment needs. The large display notch is an eyesore in comparison to the punch-hole cutouts we are used to these days but like the iPhone 13, it is only a matter of time before you get used to it. Otherwise, this is a nice AMOLED display with FHD+ resolution. Everything looks bright and vibrant but saturation levels are contained.

Vivo does not state whether there’s support for HDR10+ and Dolby Vision content. You do get a refresh rate of 90Hz, which seems adequate but in a world dominated by 120Hz screens, it looks a little jittery (maybe just my eyes, your perception could be different). There’s an optical fingerprint scanner that unlocks fast and detects fingerprints easily as long as your hands are dry.

For the first time, Vivo has given the V series a proper “flagship-grade” chip. I admit the MediaTek Dimensity 1200 is an era behind the Snapdragon 888 and the current-gen Snapdragon 8 Gen 1, but the performance is comparable to some of those high-end smartphones. Paired with up to 12GB RAM and 256GB storage, the V23 Pro has enough grunt to keep everything flowing smooth. Oh, there’s Android 12 underneath the FunTouch OS 12 skin.

The Dimensity 1200 was a very fast chipset in 2021 and even now, it holds on to its speed. Hence, whether you are browsing through Instagram or checking your Flipkart shopping list, the V23 Pro keeps it all smooth and lag-free. RAM management is towards the aggressive side, with demanding apps and games booted out soon after you put them in the background. But as long as the app is running, the V23 Pro does not restrict it from its side.

You don’t buy a fancy Vivo phone for gaming but if you do, you aren’t going to be disappointed. Call of Duty: Mobile runs on High settings with High frame rates with ease, while Shadow Fight 4 Arena comfortably sits at the Ultra settings without any issue. It heats up slightly around the cameras but not enough to make it uncomfy.

The weak link, however, is the software itself. Despite years of presence in the market, Vivo’s FunTouch OS 12 hasn’t learned the mannerisms of the modern-day user interfaces. Make no mistake, FunTouch OS 12 is fast, has slick animations and is easy to use, despite some of the pre-loaded bloatware. The UI, however, feels like a relic from the yesteryears and despite some of Android 12’s elements, I had a hard time justifying its presence on a phone that costs ₹40,000. Oppo’s ColorOS 12 looks miles better and feels much nicer than this messed up interface.

I also wish Vivo had offered a dual speaker setup, considering the premium it is asking. The single loudspeaker is decent and loud enough but most other phones at this price sound much better with their stereo speakers.

I faced no major issues with network connectivity on the Jio network. Even on Wi-Fi, the phone was able to stay connected where other phones drop it at times. Call quality was fine but I wish Vivo had fitted a louder loudspeaker to offset the loud ambience of Indian conditions.

A lot of emphasis is given to the selfie cameras on the V23 Pro and it seems justified. The 50MP main camera and 8MP ultra-wide camera make for a very solid front camera system. Detail levels are astonishing and so is the colour management for a phone of this price. Even when taking against the light, the HDR does a good job of keeping the subject well lit and in focus while treating the overexposed background nicely. Paired with the dual tone LED flash, umpteen AI modes and filters to “fine tune” your face, the V23 Pro is essentially the best package for selfies in any lighting situation.

The rear camera system is good for the price range. The 108MP main camera is utilised cleverly by the software for details, sharpness, and decent dynamic range. It is not colour accurate to professional standards and in low light situations, it struggles with exposure and skin tones, but for most social media uploads, you cannot seem to go wrong with it. If you like saturated and bright photos, you are going to love the V23 Pro’s main camera. 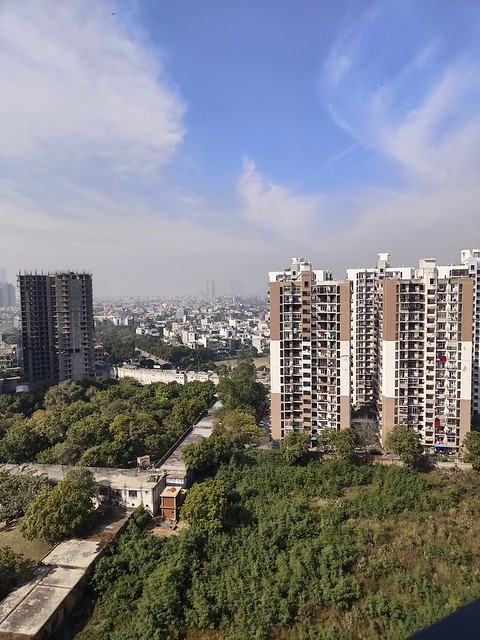 The 8MP ultra-wide camera suffers in comparison with poor dynamic range (unimpressive colours), lower details, and overall inferior quality. The 2MP macro camera is pathetic by all means; you can get a better macro photo by simply zooming in on a 108MP resolution photo.

With a 4300mAh battery, the V23 Pro is strictly a single-day phone under moderate usage. If you take 3-4 hours of calls per day, browse the web and social media for another 2-3 hours, do some random selfie shoots, and some miscellaneous activities, you are most likely to get the low battery warning by late night. Note that our unit was running on a pre-production version of the OS and hence, by the time you buy it, you could get better (or worse) battery life. The 44W wired charging takes close to an hour from 1-2 percent.

The Vivo V23 Pro in its attempt to justify its flagship tier pricing ends up offering flagship-like specs from last year. However, the overall user experience is far from the experience you get with the Vivo X70 or the older X60 series. FunTouch OS is the biggest culprit here and Vivo needs to amp up its efforts to get the software right at all costs. The competition from Oppo, Samsung, Realme and Motorola has gone up by a notch in this regard.

The rest of the phone, however, is fantastic to use. The selfie camera performance is great, especially for what you pay for the phone. The Dimensity 1200 keeps everything chugging along fast and smooth. The display is nice to look at, although a 120Hz refresh rate should have been standard here. And most importantly, it commands attention with its beautiful design and that colour changing rear.

Should you buy the Vivo V23 Pro? The answer is a confident “yes” but only if you care highly for selfies and a very flashy design. For everything else, the Samsung Galaxy S20 FE 5G at ₹36,950 is still our top recommendation. Don’t forget the Motorola Edge 20 Pro as well.

Watch Netflix shows on TV with these simple tricks

iQOO Neo 6 VS Poco F4: We compare the specs, both will SURPRISE

Nothing Phone (1): Here it is in all its “black and white” glory, check out its cool lights!

GTA Online VIP registration on PC, Console and Xbox: Do it THIS way

Free Fire logo has changed forever; here is what it looks like now